Classic monkey bread with a Vegan twist, made from homemade sweet dough, rolled in cinnamon then drizzled in sugary goodness. 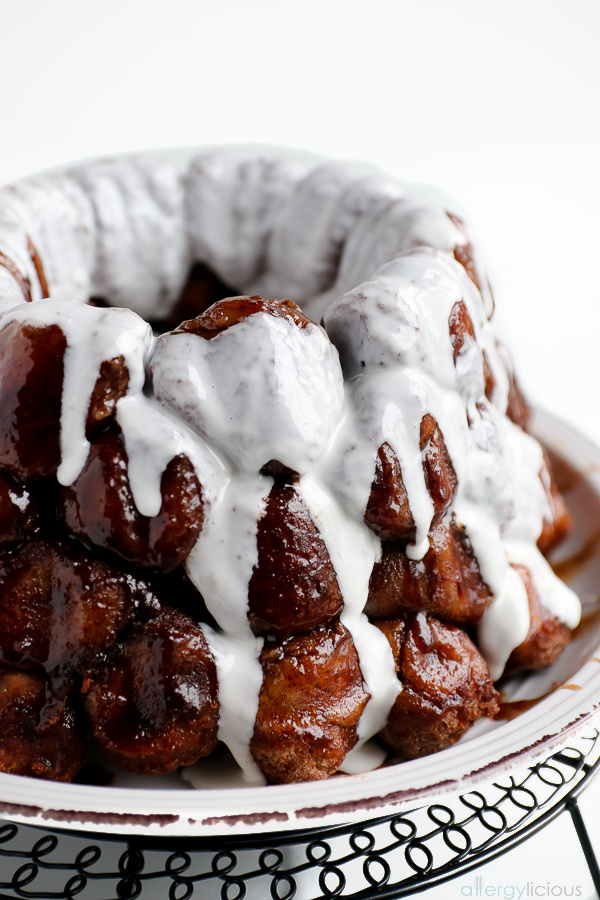 This recipe is called the BEST monkey bread because there really is no comparison to this homemade gooey, sweet, decadent VEGAN monkey bread.

What is monkey bread? 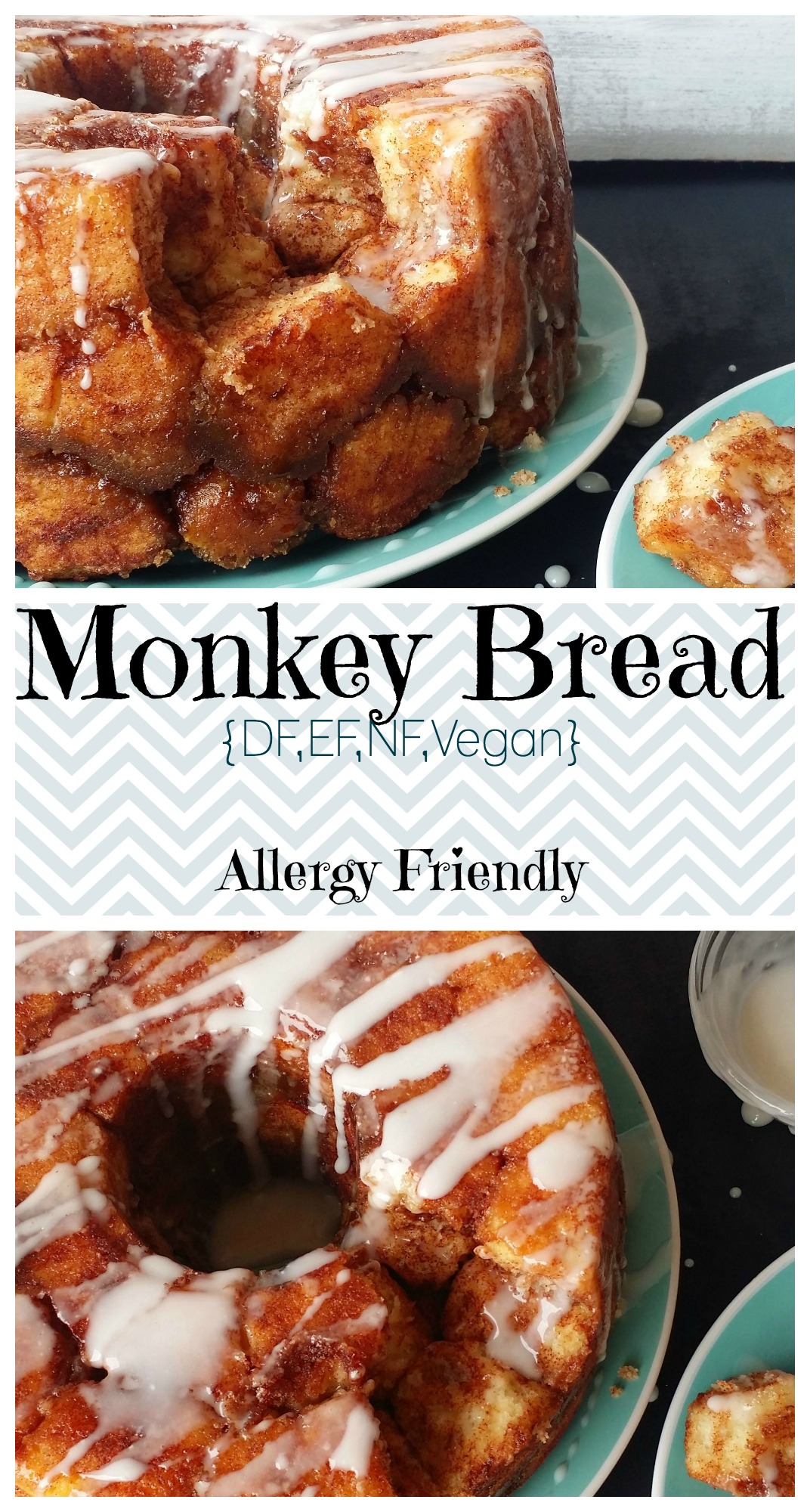 Have ever eaten monkey bread? You may have actually had it before but by a different name such as cinnamon roll bread, pull-apart rolls, or monkey balls, just to name a few. If you haven’t had this bread before, then you are in for a treat. It is like having a HUGE Cinnabon for breakfast, lunch or dessert. Warm and gooey sweet bread rolls, coated in cinnamon sugar, layered then baked in a bundt cake pan, then drizzled (or drenched) in a layer of icing. Sounds pretty amazing, right? 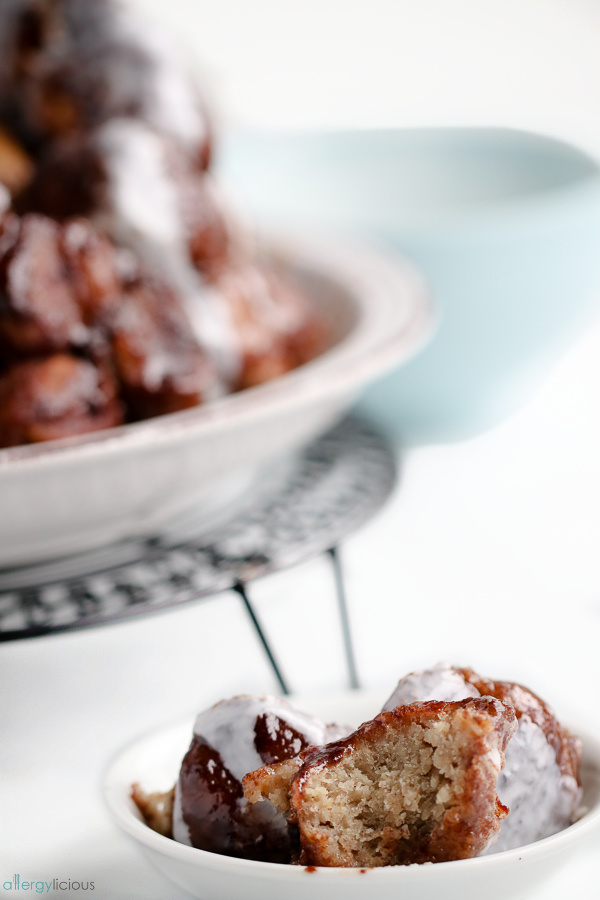 Unfortunately, a craving for such would either send me to the mall or a bakery and both of those options only make the traditional “unsafe” versions. Of course I could cheat if I really wanted to, but that wouldn’t be right. Soooooo, my desire for these “Finger-lickin” bites had to wait, and wait, and wait. That is until I decided to just make them myself using only ingredients that were safe {dairy, egg, nut & recently gluten-free}. 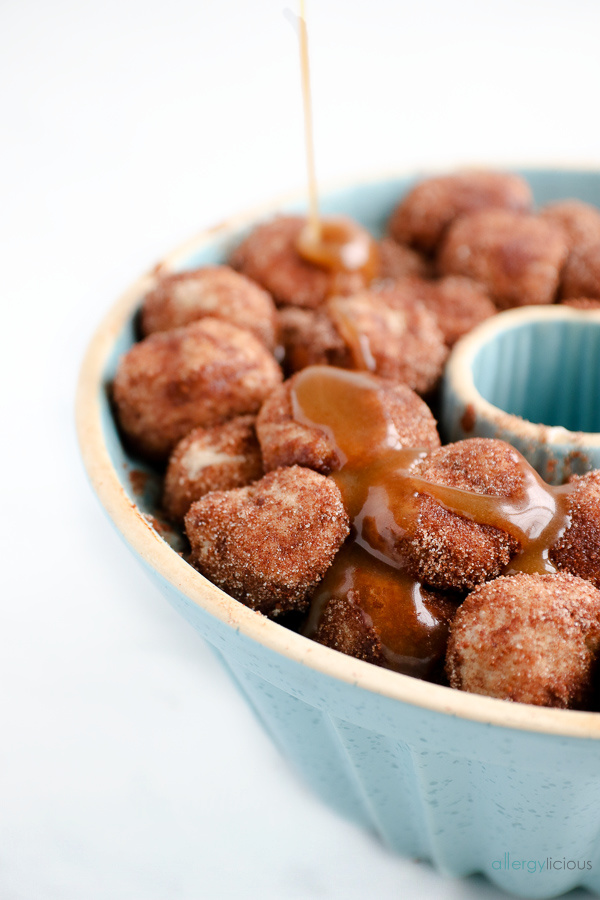 I am so glad I didn’t wait any longer. I just never realized just how simple making this delightful bread would be until I got started. It’s like making pizza dough, but topping it with sweetness instead of savory. Wow! If only I would have tried this sooner. 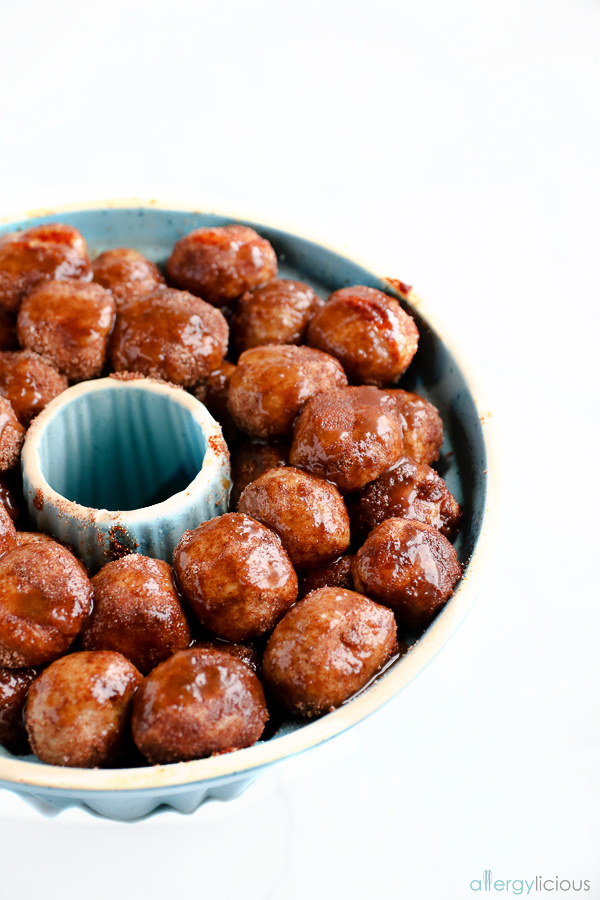 Although making monkey bread from scratch takes a little more time to make than using canned dough, you will be quickly thanking yourself for going the homemade route! Once you smell the warm cinnamon sugar swirling out of the oven, you’ll know you it was well worth it! 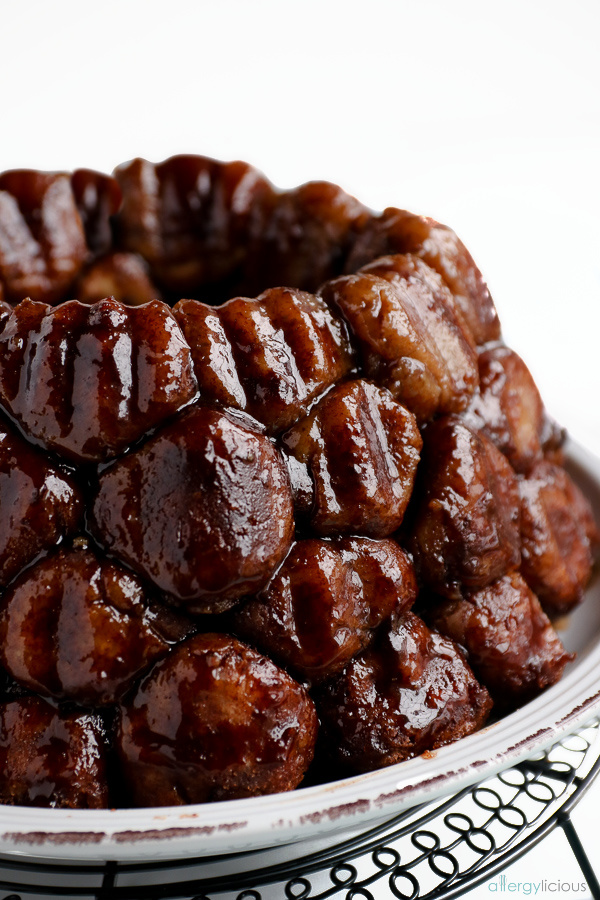 From start to finish, this monkey bread takes about 60 minutes, and isn’t at all fussy. Anyone can make it.

No yeast, no waiting, no dough to roll, no rising, and so so easy.

And if you’re short on time, just make the dough the night before and refrigerate until the next day. You can do that, right?

The next morning, set aside 10-15 minutes to roll the dough into balls, coat in cinnamon-sugar, layer and bake. And don’t be skimpy on that cinnamon sugar! The heavier the cinnamon-sugar coating, the gooey-er your monkey bread will be…which is what you and everyone else wants. Trust me! 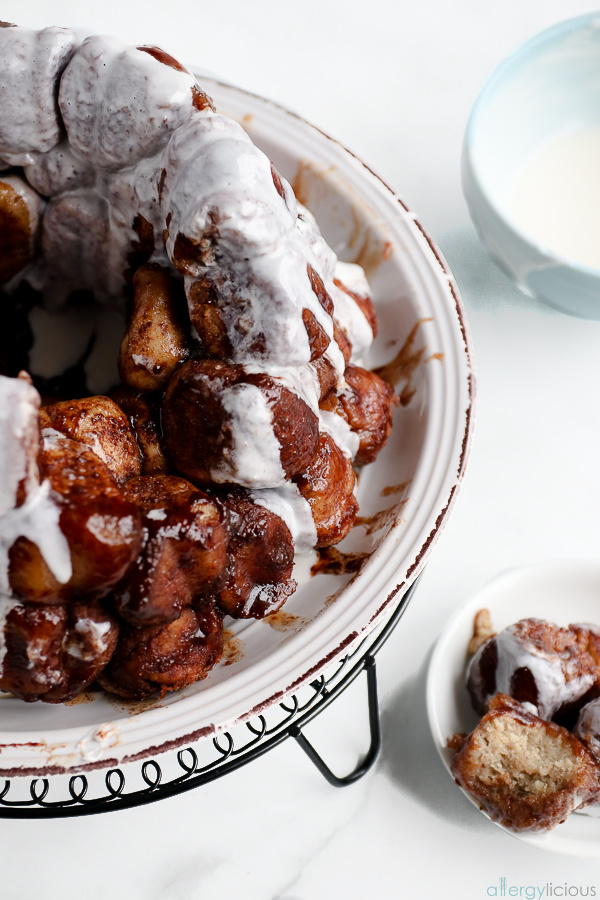 You’ll be licking your fingers clean and fighting off your kids over each bite-sized ball of of cinnamon sugar goodness.

Will last approximately 3 days but tastes best on Day 1.

This post has been updated with new photos and a few revisions since it’s original posting in 2015. ENJOY! 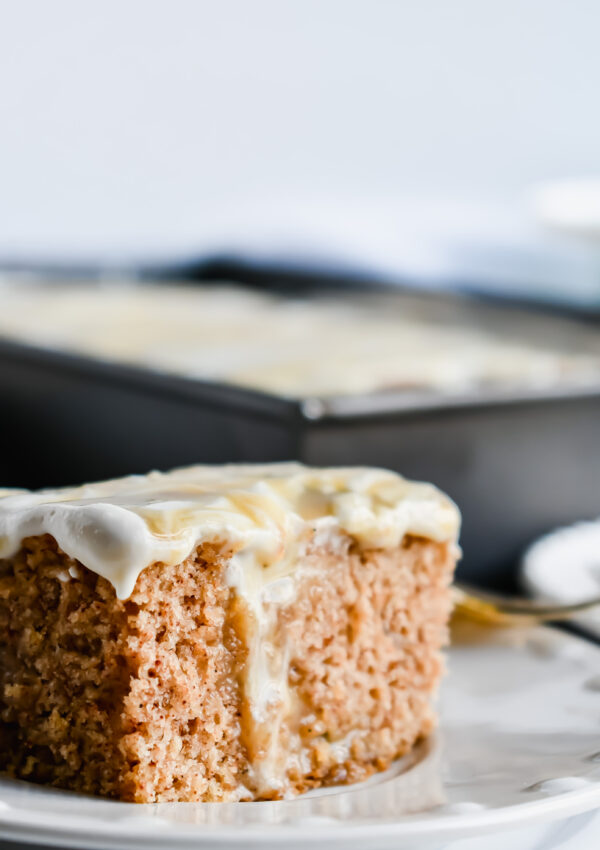 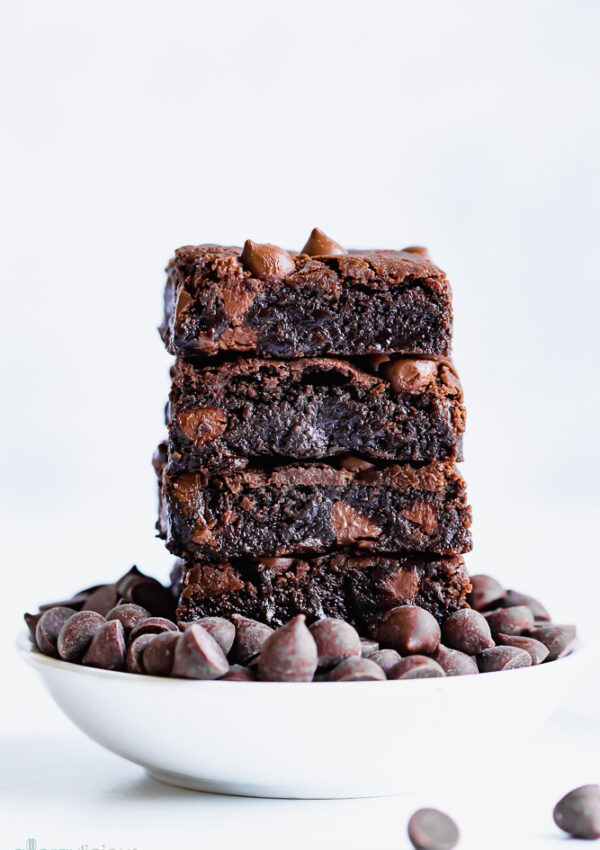 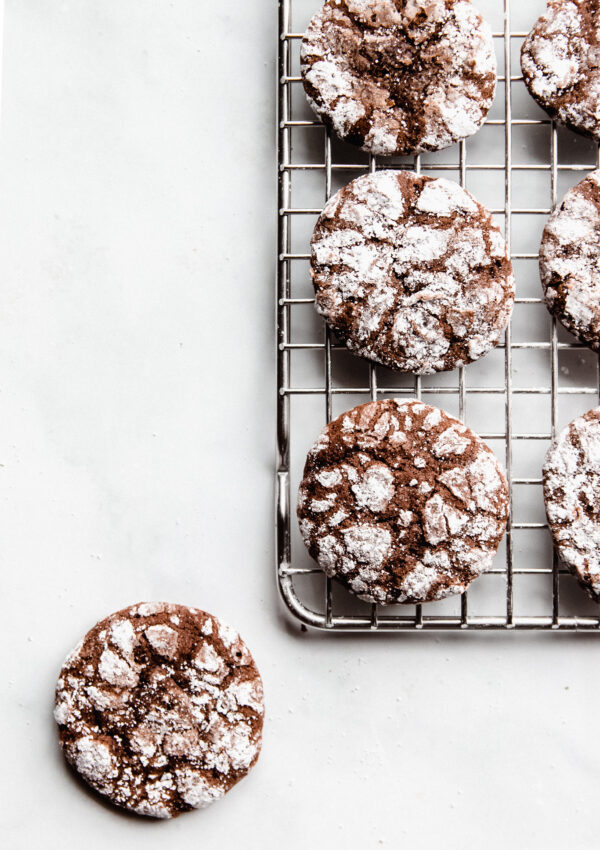 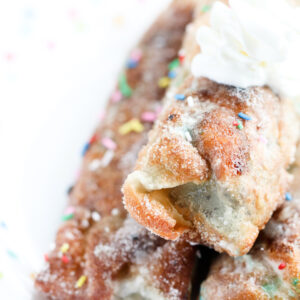 Please note that although specific vegan and allergy-friendly brands may be used in a recipe, it is still recommended to double-check the labels.  Ingredients, processes and products are subject to change by a manufacturer at any time.

Love is in the air and these vegan Linzer cookies

Mini German Chocolate Cupcakes 🍫🧁 because so